Progressive Constructions in the Spanish Spoken in Puerto Rico 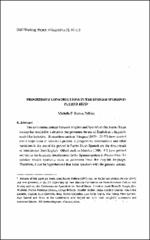 The continuous contact between English and Spanish in the Puerto Rican society has resulted in a situation that promotes the use of English as a linguistic model for imitation. Researchers such as Vázquez (1974: 75-77) have posited that interpolation of adverbial phrases in progressive constructions and other variations in the use of the gerund in Puerto Rican Spanish are the direct result of interference from English. Others such as Morales (1986: 41) have pointed out that in the linguistic interferences in the Spanish spoken in Puerto Rico, the speaker selects syntactic rules or processes from the English language. Therefore, it can be hypothesized that those speakers with the greatest amount of contact with English will produce these innovative forms with greater frequency than those with limited English interference. This paper tests these hypotheses through the examination of the following structure: forms with semantically telic verbs in a progressiveconstruction (e.g. 'Estaba disparando un tiro.' 'S/He was firing a shot.'). These progressive constructions were obtained through sociolinguistic interviews of 18 speakers of Puerto Rican Spanish. The participants also completed a questionnaire which revealed the level of contact with English that each speaker had. A total of 501 tokens from their speech was examined. These tokens were correlated with a variety of factors based on the information collected by the questionnaires. The quantitative analysis of these factors was accomplished by using the statistics package for sociolinguistic analysis, GoldVarb 2.0. The main results were that those speakers who had no exposure to English in the United States have a positive correlation with usage of relic verbs in progressive constructions, while those with more exposure to English at higher levels of education have a negative correlation for usage of telic verbs in progressive constructions. On the other hand, those speakers who used Spanish as well as English outside the home have a higher frequency of usage of telic verbs in progressive constructions than those who only used Spanish in the same linguistic domains.