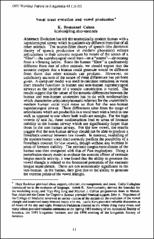 Evolution has left the anatomically modern human with a supralaryngeal airway which is qualitatively different from that of all other animals. The source-filter theory of speech (the dominant theory of speech production in modern phonetics) relates articulations to their acoustic outputs by means of the action of a "filter"--the supralaryngeal vocal tract--on a "source"--air coming from a vibrating larynx. Since the human "filter" is qualitatively different from that of other animals, we should expect that the acoustic outputs that a human could generate would be different from those that other animals can produce. However, no satisfactory account of the nature of these differences has yet been given. A computer model was used to calculate variations in vocal tract transfer functions in human and non-human supralaryngeal airways as the location of a vocalic constriction is varied. The results suggest that the nature of the acoustic differences between the human and non-human anatomies has to do with nonlinearities which characterize articulatory/acoustic relations for the anatomically modern human vocal tract more so than for the non-human supralaryngeal airway. These differences arise from the range of articulations which are producible in a vocal tract with a bend in one wall, as opposed to one where both walls are straight. For the high vowels /i/ and /u/, these nonlinearities lead to areas of formant stability in the human airway which are significantly larger than those in the non-human airway. For the low vowel, the results suggest that the non-human airway should not be able to produce a front/back contrast between low vowels. In contrast, modelling of the modern human vocal tract correctly predicts the possibility of a front/back contrast for low vowels, though without any increase in areas of formant stability. The extrinsic tongue musculature of the human was then compared with that of Pan troglodytes. Using a perturbation theory model to evaluate the acoustic effects of extrinsic tongue muscle activity, it was found that the ability to generate the vowel triangle is related to the functional potentials of the extrinsic tongue musculature. These are not acoustically significant in the non-human. In the human, they give rise to the ability to generate the extreme points of the vowel triangle.