Gestural Phasing as an Explanation for Vowel Devoicing in Turkish 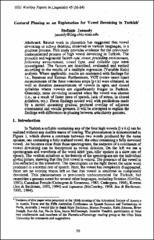 Recent work in phonetics has suggested that vowel devoicing or schwa deletion, observed in various languages, is a gradient process. This study provides evidence for the previously undocumented process of high vowel devoicing in Turkish. The prosodic and segmental factors rate, stress, preceding environment, following environment, vowel type, and syllable type were investigated. The factors are described, evaluated and ranked according to the results of a multiple regression (Variable Rule) analysis. Where applicable, results are contrasted with findings for i.e., Japanese and Korean. Furthermore, VOT (voice onset time) measurements of the three voiceless stops [p t k] were obtained, as well as duration measurements of vowels in open and closed syllables where vowels are significantly longer in Turkish. Generally, most devoicing occurred when the vowel was shorter (i.e., as a result of faster rates of speech, lack of stress, in closed syllables, ect.). These findings accord well with predictions made by a model assuming gradual gestural overlap of adjacent consonantal and vocalic gestures. It will be attempted to explain the findings with differences in phasing between articulatory gestures.