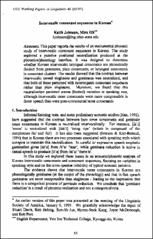 This paper reports the results of an instrumental phonetic study of intervocalic consonant sequences in Korean. The study explored a putative positional neutralization produced at the phonetics/phonology interface. It was designed to determine whether Korean intervocalic laryngeal consonants are phonetically distinct from geminates, plain consonants, or laryngeal consonants in consonant clusters. The results showed that the contrast between intervocalic tensed singletons and geminates was neutralized, and that both of these patterned with heterorganic consonant sequences rather than plain singletons. Moreover, we found that this neutralization persisted across (limited) variation in speaking rate, although intervocalic tense consonants were more compressible in faster speech than were post-consonantal tense consonants.