Longitudinal Study of the Acquisition of Taiwanese Initial Stops 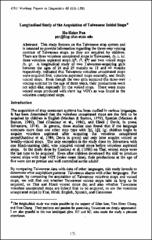