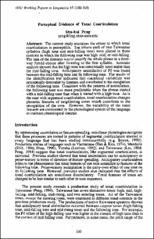 The current study examines the extent to which tonal coarticulation is perceptible. Ten tokens each of two Taiwanese syllables (high tone and mid-falling tone) were placed in three contexts in which the following tone was high, mid, or mid-falling. The task of the listeners was to identify the whole phrase in a threeway forced choice after listening to the first syllable. Acoustic analysis showed that the high tone was contextually more stable than the mid-falling tone. Anticipatory assimilation of F0 was found between the mid-falling tone and its following tone. The results of the identification test indicated that contextual variability was perceptually detectable by listeners and contributed to the recognition of the following tone. Consistent with the patterns of assimilation, the following tone was more predictable when the phrase started with a mid-falling tone than when it started with a high tone. As is the case with segmental coaiticulation, tonal coarticulation changes phonetic features of neighboring tones which contribute to the recognition of the tone. However, the variability of the tonal features are constrained by the phonological system of the language to maintain phonological contrast.