On the Use of Microsimulation for Investigating Ideological Dissent: Exemplary Analyses of the Values of the European Political Left 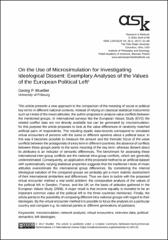 This article presents a new approach to the comparison of the meaning of social or political key terms in different national contexts. Instead of relying on classical statistical instruments such as t-tests of the mean attitudes, the author proposes to analyze value conflicts between the mentioned groups. In international surveys like the European Values Study (EVS) the related conflict data are not directly available but can be generated by microsimulation: for this purpose the article proposes to look at the value differences of randomly matched artificial pairs of respondents. The resulting dyadic data-records correspond to simulated virtual encounters of persons with the same or different opinions about a political issue. In this way it becomes possible to measure the amount and the thematic focus of the value conflicts between the protagonists of a key term in different countries: the absence of conflicts between these groups points to the same meaning of the key term, whereas dissent about its attributes is an indicator of semantic differences. The benchmark for assessing these international inter-group conflicts are the national intra-group conflicts, which are generally underestimated. Consequently, an application of the proposed method to an artificial dataset with systematically varying statistical properties suggests that the traditional t-tests of mean attitudes overestimate the international group differences. By considering the internal ideological variation of the compared groups we probably get a more realistic assessment of their international similarities and differences. Thus we dare to tackle with the proposed virtual encounter method a real world problem: the comparative analysis of the values of the political left in Sweden, France, and the UK on the basis of attitudes gathered in the European Values Study (2008). A major result is that income equality is revealed to be an important common value of the political left in the three countries mentioned. Finally, the article points to the possibility of comparing different intra-national groups with regard to their ideologies. By the virtual encounter method it is possible to focus the analysis on a particular country and compare e.g. its national parties or different generations of partisans.