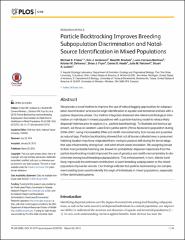 We provide a novel method to improve the use of natural tagging approaches for subpopulation discrimination and source-origin identification in aquatic and terrestrial animals with a passive dispersive phase. Our method integrates observed site-referenced biological information on individuals in mixed populations with a particle-tracking model to retrace likely dispersal histories prior to capture (i.e., particle backtracking). To illustrate and test our approach, we focus on western Lake Erie’s yellow perch (Perca flavescens) population during 2006–2007, using microsatellite DNA and otolith microchemistry from larvae and juveniles as natural tags. Particle backtracking showed that not all larvae collected near a presumed hatching location may have originated there, owing to passive drift during the larval stage that was influenced by strong river- and wind-driven water circulation. Re-assigning larvae to their most probable hatching site (based on probabilistic dispersal trajectories from the particle backtracking model) improved the use of genetics and otolith microchemistry to discriminate among local breeding subpopulations. This enhancement, in turn, altered (and likely improved) the estimated contributions of each breeding subpopulation to the mixed population of juvenile recruits. Our findings indicate that particle backtracking can complement existing tools used to identify the origin of individuals in mixed populations, especially in flow-dominated systems.

Data are available from Dryad under the DOI https://doi.org/10.5061/dryad.14625
Partial funding for Open Access provided by The Ohio State University Open Access Fund.

This is an open access article, free of all copyright, and may be freely reproduced, distributed, transmitted, modified, built upon, or otherwise used by anyone for any lawful purpose. The work is made available under the Creative Commons CC0 public domain dedication.