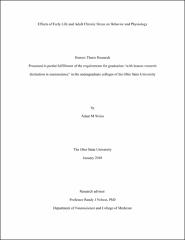 In the modern and rapidly changing world, rates of perceived stress in humans have been increasing. Stress, which is caused by a disruption of homeostasis, activates the hypothalamic-pituitary-adrenal (HPA) axis, resulting in the release of glucocorticoids to make sufficient resources available for the body to respond to the stressor. Whereas glucocorticoids are beneficial during the acute stress response, chronic stress causes dysregulation of the endocrine system in an age-specific manner, leading to altered glucocorticoid concentrations in the serum and receptor expression in the brain. The goal of this study was to determine the effect of early life and adult chronic stress as a model of the organizational-activational capacity of glucocorticoids. The organization-activation hypothesis states that steroid hormones organize brain circuitry by a bout of high concentrations in early life and activate these circuits by a second event later in development. According to this hypothesis, early life stress and adult stress should organize and activate the glucocorticoid system to produce alterations in behavior and gene expression. To test this hypothesis, animals were exposed to maternal deprivation stress as an early life stressor (ELS) and/or unpredictable chronic mild stress (UCMS) to create four groups: Control/Control, Control/UCMS, ELS/Control, and ELS/UCMS. Following UCMS, all groups underwent behavioral testing and then gene expression was assayed. UCMS mice showed increased depressive-like responses toward adult chronic stress in weight gain and the sucrose preference test. However, the ELS did not affect behavioral outcomes or response to UCMS in adulthood, and few conclusions about gene expression could be drawn from this experiment. Future testing must be conducted to determine whether glucocorticoids follow the organization-activation hypothesis.