Mate Poaching and the Dark Triad 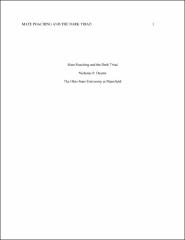 The Dark Triad is a collective term used to describe the malevolent personality dimensions of narcissism, Machiavellianism, and psychopathy. These constructs of the Dark Triad have been associated with many undesirable behaviors including the exploitation of others for personal gain. This study investigated the Dark Triad in the context of mate poaching—the act of stealing a mate away from an already established, and presumably, monogamous relationship. Past research has correlated the constructs of the Dark Triad with self-reported acts of mate poaching, but this is the first study to assess mate poaching in relation to the Dark Triad using quasi-experimental methodology. College students (N = 142) participated in what they believed to be a test of a new dating service geared towards college students. Students filled out personality questionnaires that measured Dark Triad traits. Afterwards, they were ostensibly matched with an opposite-sex target whom they were led to believe was a student on campus who shared similar personality traits. The target's image and profile were held constant with the exception that the relationship status was randomly assigned to be either single or in a relationship. The results indicated that only the construct of psychopathy was related to mate poaching. This effect was only found for those individuals who also reported being in a relationship. For the other constructs, no desire to mate poach was detected. This is contrasted with self-report studies that have indicated that those high in dimensions of the Dark Triad report engaging in mate poaching.

3rd place in Psycholgy at the Denman Undergraduate Research Forum, 2016