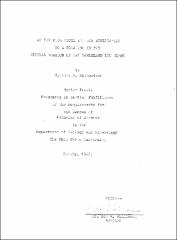 Radar soundings from Greenland show internal layering in the ice sheet. Many investigators have suggested that these layers represent ancient depositional surfaces. An ice flow model assuming steady-state is used to calculate depths of isochrons. This model uses measured ice thickness and accumulation rates to calculate vertical and horizontal velocities. From this vertical strain rates, average annual layer thickness, and depths of isochrons are calculated. Comparison of the calculated isochrons with the internal radar layering shows close agreement between shallow-depth radar layering and young isochrons, but increasing discrepancies with depth. This is interpreted as showing that the layers do represent isochrons, but that the steady-state assumption used in the model is not valid for calculating older and deeper layers. Decreasing thickness and accumulation values brings closer agreement to lover, older layers, indicating that the ice sheet has not been in a steady-state in the past and that thickness and accumulation were probably smaller in the past and have increased to present-day values.