Discourse functions of pitch range in spontaneous and read speech 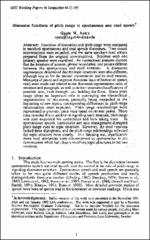 Functions of intonation and pitch range were compared in matched spontaneous and read speech discourses. Two casual conversations were recorded, and the same speakers read scripts prepared from the original conversations. Sections with one primary speaker were examined. An intonational analysis showed that the locations of accents, phrase boundaries, and pauses differed between the spontaneous and read versions. A discourse segmentation determined that the topic structures were also different, although less so for the second conversation and its read version. Measures of pause and segment durations (as a reflection of speech rate) were made and related to the discourse segmentation units of sentence and paragraph, as well as to turn structure classifications of possible turn, 'rush through', and holding the floor. Since pitch range plays an important role in conveying the hierarchical, segmentation of discourse, generally being expanded at the beginning of new topics, corresponding differences in pitch range relationships were expected. Pitch range relationships were represented in phonetic pitch trees based on phrasal peaks. These trees revealed that in addition to signaling topic structure, pitch range was also expanded for corrections and turn taking cues. In spontaneous speech, corrections and turn management disrupted pitch range cues to topic structure. However, the read versions lacked these disruptions, and the pitch range relationships reflected the topic structure more clearly. In a listening test, significantly more read utterances were misperceived as spontaneous in the conversation which had closely matching topic structures in the two versions.

The work was supported in part by a National Science Foundation Graduate Fellowship.