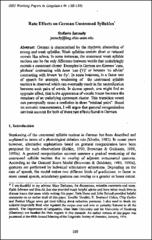 German is characterized by the rhythmic alternation of strong and weak syllables. Weak syllables contain short or reduced vowels like schwa. In some instances, the unstressed weak syllable nucleus can be the only difference between words that underlyingly contain a consonant cluster. Examples in German are Kannen 'cans, pitchers' contrasting with kann 'can (V)' or beraten 'to advise' contrasting with braten 'to fry'. In some instances, in a faster rate of speech for example, weakening of the unstressed syllable nucleus is observed which can eventually result in the neutralization between such pairs of words. In slower speech, one might find an opposite effect, that is the appearance of vocalic traces between the members of an underlying consonant cluster. This transition vowel can perceptually cause a confusion in these "minimal pairs". Based on acoustic measurements, I will argue that gestural reorganization can best account for both of these rate effects found in German.