Asymmetry of prosodic effects on the glottal gesture in Korean 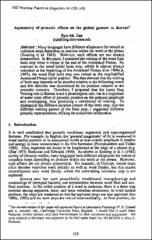 Many languages have different allophones for voiced or voiceless stops depending on position within the word or the phrase (Keating et al. 1983). However, such effects are not always symmetrical. In this paper, I examined the voicing of the word final lenis stop when it comes at the end of the Accentual Phrase. By contrast to the word initial lenis stop, which is almost always voiceless at the beginning of the Accentual Phrase (Jun 1990a,b, 1993), the word final lenis stop was voiced at the resyllabified Accentual Phrase initial position. The data showed that the voicing of lenis stop depends on its duration relative to the following vowel and this duration was determined by its position relative to the prosodic contexts. Therefore, I proposed that the Lenis Stop Voicing rule in Korean is not a phonological rule, but is a byproduct of some other effect of prosodic position on the gestural amplitude and overlapping, thus producing a continuum of voicing. To distinguish the different duration pattern of the lenis stop, thus the different voicing pattern of the lenis stop, I suggested different prosodic representations utilizing the coda/onset information.

The work reported in this paper was supported by the NSF under Grant No. IRI-8858109 to Mary E. Beckman.