Effects of Prosodic Position and Tonal Context on Taiwanese Tones 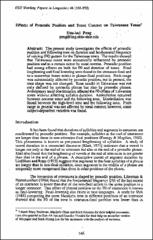 The present study investigates the effects of prosodic position and following tone on duration and fundamental frequency of voicing (F0) pattern for the Taiwanese tones. The results showed that Taiwanese tones were acoustically influenced by prosodic position and to a certain extent by tonal context. Prosodic position had strong effects on both the F0 and duration of tones. Final lengthening and final lowering were found in the utterance-final and to a somewhat lesser extent in phrase-final positions. Pitch range was substantially affected by prosodic position, but in general, the tone shape was not changed. Tone sandhi in Taiwanese was not only defined by syntactic phrase but also by prosodic phrase. Anticipatory tonal coarticulation affected the F0 offsets of Taiwanese tones without affecting syllable duration. Assimilation occurred between contour tones and the following tone. Dissimilation was found between the high-level tone and the following tone. Pitch range in general was not affected by tonal context; however, some subject-dependent variation was found.