Ambiguity Tests and How to Fail Them 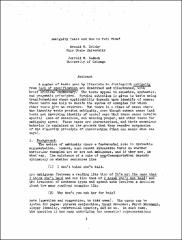 A number of tests used by linguists to distinguish ambiguity from lack of specification are described and illustrated, with brief critical commentary. The tests appeal to semantic, syntactic, and pragmatic principles. Special attention is given to tests using transformations whose applicability depends upon identity of sense; these tests can help to decide the status of examples for which other tests give no evidence. But there is a class of cases where the identity tests predict ambiguity, even though common sense (and tests not involving identity of sense) says that these cases involve special uses of sentences, not meaning proper, and other tests for ambiguity agree. These cases are characterized, and their anomalous behavior is explained on the grounds that they require suspension of the sincerity principle of conversation (that one means what one says).