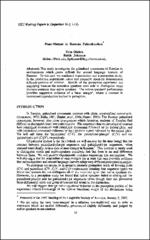 This study investigates the palatalized consonants of Russian in environments which prove difficult for second language learners of Russian. To this end, we conducted a production and a perception study. In the production experiment, native and nonnative speakers demonstrated different patterns of contrast. Results of the perception experiment are surprising because the nonnative speakers were able to distinguish more phonetic contrasts than native speakers. The native-speakers' performance provides supportive evidence of a 'near merger', where a contrast is maintained in production but lost in perception.