Toward a Linearization-Based Approach to Word Order Variation in Japanese 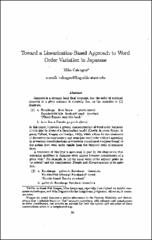 Japanese is a strongly head final language, but the order of nonhead elements in a given sentence is relatively free, as the examples in (1) illustrate. (1) a. Hanako-ga kono hon-o yonda (koto) Hanako-NOM this book-ACC read (matter) '(That) Hanako read this book.' b. kono hon o Hanako ga yonda (koto) In this paper, I provide a general characterization of word order variation of this type in terms of a linearization model (Dowty, in press; Reape, in press; Pollard, Kasper and Levine, 1992), which allows for the treatment of discontinuous constituency and semi-free word order without appealing to movement transformations or otherwise complicated analyses bound to the notion that word order results from the terminal yield of syntactic trees. A treatment of this type is motivated in part by the observation that sentential modifiers in Japanese often appear between complements of a given verb. For example, in (2) the linear order of the adjunct gakko de, 'at school,' and the complements Hanako and Haruka appears to be quite free. (2) a. Hanako-ga gakko-de Haruka-ni kisuoshita Hanako-NOM school-at Haruka-DAT kissed 'Hanako kissed Haruka at school.' b. gakko-de Hanako-ga Haruka-ni kisuoshita c. Hanako-ga Haruka-ni gakko-de kisuoshita If we adopt ID schemata of the type posited for earlier versions of HPSG (Head-driven Phrase Structure Grammar, Pollard and Sag 1987, 1993) it would be assumed that, in the case of (2), Hanako ga and Haruka ni would combine (all at once) with the verb kisuoshita by way of some head-complement schema (cf. P&S 1993, Schema 3) and that the sentential adverb gakko de would combine with the resulting phrase by way of a separate head-adjunct schema (P&S 1993, Schema 5). An analysis such as this, however, does not allow adjuncts to appear interspersed with complements, unless the principles of constituent ordering are reformulated to allow for discontinuous constituents. Linearization, however, allows us to "have our cake and eat it too." With phrase-structural and linear-precedence relations occupying two distinct levels of description, it is quite easy to formulate an account where elements unrelated on one level are in fact related (that is, ordered together) on another. In the case above, the adjunct gakko de is taken to be on a different phrase-structural level than the complements Hanako and Haruka. However, using a simple operation, these elements can be "unioned" into the same "word order domain," with the predictions in (2) following naturally, by way of LP constraints that allow for free variation of nonhead elements in the same such domain.