Linearization and Coordination in German 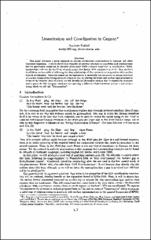 This paper attempts a novel approach to certain coordination constructions in German and other Germanic languages. It will be shown that virtually all previous attempts at describing such constructions involve asymmetric conjuncts, in violation of the general like category constraint on coordination. While independent evidence for the kinds of mechanisms that license such asymmetry is weak, these analyses in addition are incapable of reflecting the close relationship of the constructions in question with another type of coordination. Since the reason for the asymmetry is essentially the insistence on phrase structure as the sole means of describing syntactic structure (i.e. by relating structure and surface representation in terms of the terminal yield of a tree), we will develop an alternative analysis that is empirically adequate and respects the like category constraint necessitating a different relation between structure and surface string which we will call "Linearization".