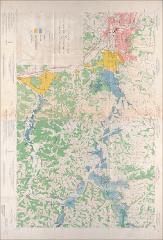 A study of the late Wisconsin lake silts of southwestern Fairfield County and northeastern Hocking County indicates that the lake was formed due to the damming effect of late Wisconsin glacial outwash. The lake occupied the valleys between Lancaster, Bremen, and Clear Creek. The sediments decrease in coarseness away from the outwash dams, indicating the glaciers as the principle source of lake water. Mollusk shells found in the lake silts are fresh water forms of mid-Pleistocene to present in age.