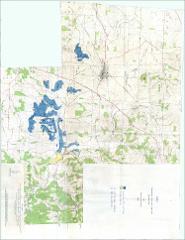 A study of the soil types and cores taken in a portion of southwestern Fairfield County indicates the presence of glaciolacustrine silts and clays in the Clear Creek Valley from Clearport, northwest, to Amanda. Mollusc shells found buried in the deposits of silty clay are fresh water forms and of mid-Pleistocene to present in age. However, the fact that these shells were buried in a matrix of late Pleistocene origin, indicates that they are of that age. The sediments decrease in coarseness away from the dam and decrease in coarseness from the edges to the center of ancient lake deposits. The deep cores obtained indicate that an average of 18 feet of silts and clays have accumulated. Amount of material varies widely from one core to another. These cores also indicate an interbedding of till or coarse deposits with lacustrine deposits, suggesting that several lakes existed in this area during the Illinoian and Wisconsin stages.