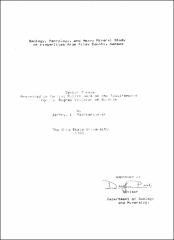 Ten kimberlite bodies are known to exist in northern Riley County, Kansas. Five of the bodies outcrop (Bala, Leonardville, Randolph No. 1, Randolph No. 2, and Stockdale) and five were discovered by drilling (Fancy Creek, Lone Tree, Lone Bush, Swede Creek, and Winkler). Magnetometer studies have revealed that the bodies dip steeply to the SE and are oriented normal to the Abilene anticline which parallells a Precambrian fault, probably of the mid-continent Keweenawan rift system. Based on mineralogy, texture, and structure, eight of the ten known kimberlites of Riley County represent the three kimberlite facies as described by Mitchell (1986). Green in color, the kimberlites all contain varying amounts of olivine, opaque oxides, garnet, rock and mineral fragments, and xenoliths. Texturally, the kimberlites are fragmental in character. The Riley County kimberlites were derived by partial melting of a phlogopite-garnet peridotite in the upper mantle at a depth of 120-300 km, temperatures near 1000 C, and high C02:H20 ratios. Ascent of the kimberlite magma occurred in the mid-Cretaceous, as several periods of abrupt movement. Final emplacement occurred at temperatures of about 100-200 C. Geochemical studies of the Riley County kimberlites indicate that they are lower in Si02 and K2O and higher in CaO and CO2, compared to other kimberlites. Preliminary results of the analysis of two kimberlite-diamond indicator minerals (ilmenite and pyrope garnet) from sediment samples collected near the kimberlite intrusions indicate that the minerals do not “fit” the compositional range for diamond bearing kimberlites. Analysis of a single grain originally identified as chromite from the Fancy Creek sluice claim reveals that the grain contains 10 percent gold. Abundant grains of aragonite were recovered from the other sluice claim, Lone Tree, their existence is probably the result of secondary alteration. Kimberlite indicator minerals are present in abundance in the sediments of the Riley County kimberlites.