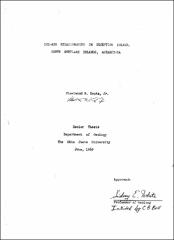 Recent volcanic eruptions on Deception Island (1967 and 1969) raise the possibility of eruptions in the recent past (1842?). Interrelationships between dirty ice, debris cover, frozen ground and meltwater hydrology reinforce the theory of reoccurring volcanism in the Antarctic Peninsula. Eruption patterns suggest that the faults along which the Deception Island Caldera collapsed are zones of frequent seismic and eruptive activity. The 1969 partially subglacial eruptions have interesting implications on the morphological evolution of the island. The extent of frozen ground and dead ice is important in understanding the climatic history of the island. Continuing investigations of the glacial and hydrologic regime will illucidate the process of ablation moraine formation in volcanic areas.