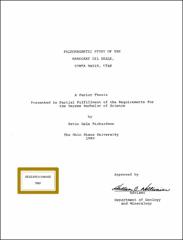 Geomagnetic polarity stratigraphy of the complete 135 foot thick Mahogany unit of the Parachute Creek Member in the Green River Formation has been determined from a borehole core drilled by Chevron West in Duchesne Co., Utah. 622 subcores were taken at equal intervals and measured with a 3-axis SCT magnetometer. 70 cores were AF demagnetized at 100 oe intervals to 600 oe in initial tests. The remaining 522 cores were treated at 300, 400, and 500 oe. Only polarity changes consistent through demagnetization and not unique to one core segment were used. The Mahogany unit is mainly normal with 9 thin reversed zones. The thickest reversal lies at 7626 feet. Compared with the polarity history of the Middle Eocene, the unit correlates with the normal polarity interval of Late Bridgerian age (46.5.-45.0 rn.y. B.P.). 40Ar/39Ar ages from the wavy tuff above and the curly tuff below imply an average age of 46.5 m.y. B.P., ±0.6 m.y. (O'Niell, 1980) placing it within marine magnetic anomaly no. 20 (La Brecque et at., 1977). Deposition rate is equal to, or less than, 8.2 mm/century for the compacted sediment. This is approximately a factor of 2 of the values quoted by Bradley in 1929 for the compacted oil shale beds of the Green River Formation. 67% compaction effect indicates an initial thickness of 400 feet, with a corrected deposition rate of 24.6 mm/century for the lamina pairs. The results confirm the earlier assumption that the laminae of the Mahogany unit in particular, and Green River Formation in general, are annual varves.