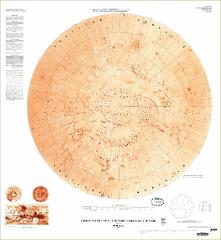 A hypothetical southeasterly wind may be responsible for the eolian carving of the canyons in the southern-most sector (N78° to N83° by 330° to 360°) of the North Polar Cap of Mars. The wind belongs to the annual Martian dust storm and has an average temperature of 240°K with a speed of 300 meters per second. The wind should strike the ice cap from the southeast or east-southeast, sublimating and transporting volatiles and dust toward the North Pole. The material should be deposited just north of the canyon heads on the slope of Dzurisin's and Blasius's (1975) possible four-kilometer-high ridge. This ridge may explain the relatively short lengths of these particular canyons by the rapid cooling of the heated air as it is forced to rise to higher elevations. The wind will precipitate its volatiles, producing possible dune fields near the canyon heads. Evidence for the southeasterly wind is lacking in itself, but the canyons have eolian features that parallel a northwest-southeast axis for such a wind direction.