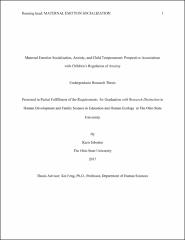 The ability to self-regulate one’s emotions is an important component in the development of anxiety symptoms and disorders during early childhood. Whereas it has been well established that certain parenting behaviors are related to child anxiety, the impact of specific parenting behaviors in socializing children’s emotion, such as maternal emotion coaching and maternal expressivity, have been researched far less. This study examined if, and to what extent, mothers’ emotion coaching behaviors and emotion expression predicts children’s adaptive and maladaptive regulation of anxiety above and beyond child fearful temperament and maternal anxiety. Participants were 61 mother-child dyads drawn from a larger longitudinal study. Data collection occurred when target children were three/four and five years old. At each time point, mothers completed the State-Trait Anxiety Inventory’s trait scale and the Child’s Behavior Questionnaire Short Form, which measure maternal anxiety and child temperament respectively. Child anxiety was measured during a laboratory task at age five. Maternal emotion coaching was measured during a one day naturalistic observational procedure at home when children were three or four years old. Regression analyses were conducted to investigate the contribution of maternal emotion coaching, maternal anxiety symptoms, mother positive and negative expression, and child temperament at age 3 or 4 to child emotion and regulatory behaviors in response to anxiety at age 5. Results of this study further clarify the interactions between mothers and children during the preschool years that can predict or even sustain children’s adaptive and maladaptive regulation of anxiety.