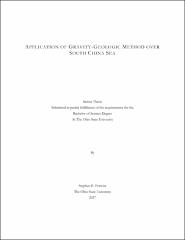 The Gravity-Geologic Method (GGM) was used to estimate a bathymetry map over an area from 8.60, 110.00 to 16.90,116.40 (latitude and longitude) in the South China Sea. The goal of this thesis was to create a bathymetry map that more accurately estimates ocean bathymetry heights from an incomplete data set. This was achieved using free-air gravity anomalies obtained from satellite radar altimetry data. Through the Gravity-Geologic Method (GGM), the anomaly data was used to estimate missing data points from a set of control points taken from the General Bathymetric Chart of the Oceans (GEBCO) data set. The produced bathymetry map correlated more with the existing bathymetry from the GEBCO data set. Some error can be observed in the produced bathymetry map, but it was shown that accurate bathymetry could be predicted from an incomplete set of data using the GGM over the South China Sea study region.