Fracking the Code on Flowback Fluid 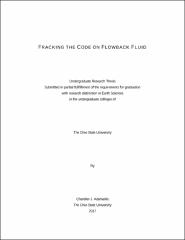 Hydraulic fracturing of shale generates brines with complex chemistries. As such, these fluids have trace metal constituents that can be rendered valuable if concentrated. This project used samples of hydraulic fracturing flowback fluid from the Utica/Point Pleasant formations in Ohio to analyze how different additives of acids and bases could influence precipitation and sequester trace metals. Flowback fluids were treated with sulfuric acid (H2SO4), phosphoric acid (H3PO4), hydrochloric acid (HCl), and sodium carbonate (Na2CO3), each in a high and low concentration. The fluids were allowed to react over several weeks and then the precipitates and the solutions were analyzed using scanning electron microscopy (SEM) and x-ray diffraction (XRD), and inductively coupled plasma optical emission spectrometry (ICP-OES) and inductively coupled plasma mass spectrometry (ICP-MS), respectively. Reacting hydraulic fracturing fluid with these acids and bases in different concentrations allowed for the precipitation of different minerals with variable elemental compositions. For example, low concentrations of H2SO4 resulted mainly in barite (BaSO4) precipitation, while high H2 SO4 resulted in precipitates of celestite (SrSO4) and gypsum (CaSO4 ·2H2O). Additionally, akaganeite (Fe^(3+) O(OH,Cl)) was found in the precipitates of the control sample and the high H3PO4 sample. This suggests that further research should focus on akaganeite as another phase that could sequester trace elements, because its crystal structure has large spaces that could accommodate such trace metals.