"Remember Who You Are:" The British Kindertransports of World War II 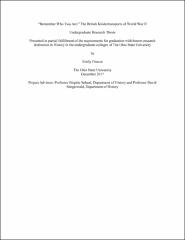 This study focused on the British Kindertransports of World War II. The Refugee Children’s Movement (RCM) rescued approximately 10,000 threatened children from the Nazi Reich in 1939 and provided them a new life in Britain. I examined the function of the RCM, the role of women in the RCM, the children’s experiences before, during, and after the war, how the Kinder were affected by their experiences, and how the transports have been remembered personally and nationally. I focused on the memoirs from the Association of Jewish Refugees: Refugee Voices Collection and used these memoirs to supplement and support the scholarly secondary sources and to identify similarities and differences in experiences. I briefly examined how the children’s gender changed how they experienced the transports, but this concept could be further expanded and researched in the future, as well as the topic of second generation trauma. In the conclusion, I briefly compared the Kindertransports to the current Syrian refugee crisis. I also discussed a few questions that were frequently mentioned by Kinder in their interviews and memoirs.