The Effect of the Lead Water Crisis as a Focusing Event on Cooperation and Conflict Among Actors in Sebring, Ohio 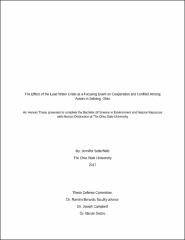 At the same time the Flint water crisis made national news in late 2015 and early 2016, a local lead water crisis was taking place in Sebring, Ohio. This lead water crisis in Sebring was a focusing event that opened a policy window during which it was the opportune time to enact change. The environmental organization, the Ohio Environmental Council (OEC) worked with state lawmakers during this short window of time following the crisis to develop House Bill 512, a bill that established requirements governing lead and copper testing for community and non-transient water systems. Furthermore, these crises also influenced proposals by Ohio congressman, answering pleas from their constituents, for federal legislation. However, at the local level, decision-making was placed in the hands of the state government actors such as the Ohio Environmental Protection Agency and state lawmakers. While there were public meetings and the OEC interviewed Sebring residents, in the grand scheme, there was little action taken by Sebring citizens themselves. By using social network analysis in conjunction with actor interviews, one can better understand this crisis and the utilization of its subsequent policy window by the actors involved. Furthermore, by determining the structure and dynamics of the network for this crisis, one can determine potential ways to improve how actors attempt to solve similar crises in the future. It was found that the social network of the actors involved was factional, with various cliques disconnected from each other or comprised of connections based on disagreement. Sebring residents and technical experts were isolated from the network as a whole and cliques comprised of governmental actors had a disproportionate amount of power. However, it is important to note that due to the nature of social network analysis and the data collection methods, these results may not show the whole picture or be otherwise incomplete. Nevertheless, to bridge the gap between local residents and government decision makers at various levels, community based organizations (CBOs) are a viable option. By shifting the structure from factional to coalitional through ties facilitated by CBOs, resources and information can flow freely within the network and power may redistributed more equally. With this coalitional structure and the advantages of CBOs, policy windows can be used to their full advantage and will lead to more positive change in the future following focusing events at the local level.