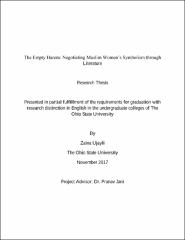 Muslim women are the most visible icons of the contentious position of Islam in the modern world, and thus what they symbolize today is an amalgam of debates and ideologies that define modern global politics. Amid the arguments on all sides, Muslim women often become symbols instead of people and their rights fall through the cracks in conversations. However, if we pay attention to Muslim female writers, we can see them reconquering the symbols which defined them. These chapters look at the ways Muslim female writers like Ghada al-Samman, Salwa Bakr, Fadia Faqir, Kamila Shamsie, and Rokeya Sakhawat Hossain react to their positions within historical and modern discussions about their roles as both women and Muslims, how they exist in the crux between conversations, and consequently how they make spaces for themselves within both literal and philosophical confinement by reclaiming the conversation about Muslim women.