Interview of Cynthia Wentz by Rosie Goodman and Richard Start 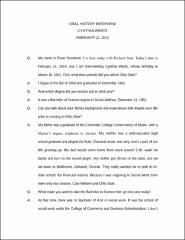 Cynthia Wentz describes her time as an undergraduate student at The Ohio State University. She began her Bachelor of Science degree in Social Welfare in 1959, and graduated in December of 1962. During her time at Ohio State, Wentz was the first female to be elected head cheerleader and the first female to be an honorary member of the Men's Judo Club. Wentz also talks about living in the dormitories on campus and in a sorority house, as well as her experience being a homecoming queen candidate.