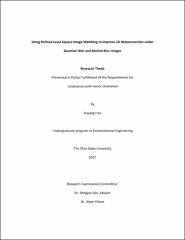 Image matching, defined as the process of finding corresponding points across multiple images, is a critical step for accurate measurement of 3D objects. Least Square Image Matching (LSM), as a classic point matching method, is known for its high accuracy over the competing approaches (up to 1/10th of pixel-size). However, the major drawback of Least Square Image Matching is its high requirement on algorithm convergence, which demands good image texture and initial solution. In addition, it deals with reasonable image distortions, while being limited by occluded area where part of the area around the points is not visible in all images and high computational resources. For this reason, the state-of-the-art procedure tends to use rather less accurate, but faster and more robust point matching approaches. But these approaches, which currently are widely used in the 3D reconstruction software, has not been examined carefully on their reliability and accuracy for images taken under various suboptimal acquisition conditions (e.g. image motion blur). Such data, if being the only source and impossible for recollection, such as those from emergent disasters or historical sources, demand for much more reliable and accurate methods for reconstructing 3D information. In this research, the classical LSM matching approach has been revisited and the LSM robustness has been improved by modification applying bound constraints optimization and good window size selection. Bound constraints are set based on the previous study. The bound in each iteration procedure can constrain the search for a solution to a reasonable region and prevent the parameters for affine deformations and the illuminations from straying from the correct values. The window size will be adjusted to be large enough to include strong features which has enough intensity variation for reliable matching, but small enough to avoid severe occlusion problems. The modified LSM algorithm has been implemented on disparity map, and the convergence has been verified. Furthermore, how photogrammetric 3D reconstruction performs using imageries under suboptimal scenario has been evaluated. 3D reconstruction using various blurred images with different extent of blurriness is experimented using Apero photogrammetry software. Such blurriness includes Gaussian blur (often resulting from camera defocusing) and directional and unidirectional motion blur (often resulting from unmatched shuttle speed to motion speed or platform oscillation (windy conditions)). 3D reconstruction based on these blurry images which are frequently observed in small UAVs surveying will degrade the quality and accuracy of 3D modeling. To carry out a controlled analysis, the blurred images used for experiment are synthetically generated using different blurring functions. The accuracy of the bundle adjustment and 3D dense reconstruction using corresponding points from state-of-art point detectors (e.g. SIFT) and corresponding points refined by LSM is compared. The robustness of the state-of-the-art point detectors and the refinement capability of LSM under different blurriness conditions is concluded.