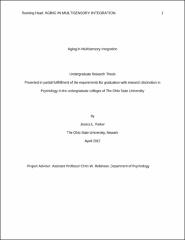 Multisensory integration is the simultaneous processing of multiple sensory inputs into a single percept. The current study aims to further the understanding of multisensory integration across development and the individual contributions of visual and auditory information. Integration was observed using the Sound-Induced Flash Illusion task. In the first experiment, young children, young adults, and older adults participated in a variant of the Sound-Induced Flash Illusion, and found that auditory input had a stronger effect on visual processing than vice versa, and this effect increased with age. Experiment 2 used a similar version of the Sound-Induced Flash Illusion task on young adults, but half of the stimuli were lowered to just above threshold to test if weakened auditory and visual stimuli could account for increased multisensory integration in older adults. It was observed that lowering intensity to above threshold resulted in decreased integration effects. The findings of the current study support auditory dominance literature and the modality appropriateness hypothesis and have implications for many tasks that require the processing of multisensory information.