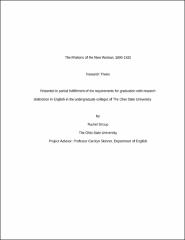 This thesis is a rhetorical analysis that studies the conversation about the emerging archetype of the American New Woman in the popular press dating from 1890-1920. The New Woman served as the aggregate stereotype of modern women during the progressive era—namely women who rode bicycles, attended college, and pursued careers. Magazines and newspapers depicted the New Woman as a sharp distinction from the esteemed Victorian “True” woman, who was submissive, pious, and virtuous. Because the True Woman was such a strong influence, much of the conversation about the New Woman held True Woman ideas. This project found that this discussion possessed the same argumentative features as the conversation about True Womanhood—women were lumped together as a whole and were all expected to follow the same roles. In addition, because the term “New Woman” is, by definition, a direct response to the old ways of womanhood, rhetoric that specifically used the phrase “New Woman” had an inauspicious connotation and tended to be derisively enacted against the archetype. Methodologically, this project relied on online archival research to identify and examine Progressive Era newspapers, and magazines, and feminist rhetorical historiography to analyze rhetorical appeals and strategies used by writers in this debate over the proper role of women. Because the rhetoric surrounding the New Woman has been understudied by rhetorical scholars, the goal of this project is to contribute to the field’s understanding of this discursive construction as it was enacted through the debate in the context of immense sociological and technological change from 1890 to 1920. Rhetorical analyses of feminist conversations in history bear a significance today in understanding the effective and ineffective appeals used in feminist movements and in understanding how current cultural precepts about gender are heavily influenced by the past.