Of Shoulders and Shadows: Selected Amish Scholarship before 1963 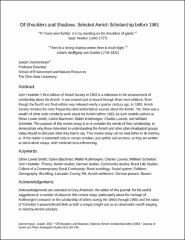 John Hostetler's first edition of Amish Society in 1963 is a milestone in the advancement of scholarship about the Amish. It was revised and re-issued through three more editions. Even though the fourth and final edition was released nearly a quarter century ago, in 1993, Amish Society remains the most frequently cited authoritative sources about the Amish. Yet, there was a wealth of other solid scholarly work about the Amish before 1963, by such notable authors as Elmer Lewis Smith, Calvin Bachman, Walter Kollmorgen, Charles Loomis, and William Schreiber. The purpose of this review essay is to re-consider the merits of their scholarship, to demonstrate why those interested in understanding the Amish and other plain Anabaptist groups today should re-discover what they had to say. This review essay can be read either in its entirety, or, if the reader is interested only in certain scholars, just within sub-sections, as they are written as stand-alone essays, with minimal cross-referencing.