The Undistinguished Scholar of the Amish, Werner Enninger, -or- Has the Time Yet Come for Rigorous Theory in Amish Studies? 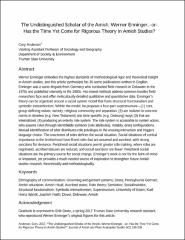 Werner Enninger embodies the highest standards of methodological rigor and theoretical insight in Amish studies, and this article synthesizes his 30-some publications written in English. Enninger was a socio-linguist from Germany who conducted field research in Delaware in the 1970s and published intensely in the 1980s. His mixed methods address common hurdles field researchers face and offer meticulously detailed qualitative and quantitative data. Enninger's theory can be organized around a social system model that fuses structural functionalism and symbolic interactionism. Within the model, he proposes a four-part superstructure—(1) core, group-defining values, namely, religious community and separation, (2) are realized in concrete norms in timeless (e.g. New Testament) and time-specific (e.g. Ordnung) ways (3) that are internalized, (4) producing an orderly role system. The role system is accessible to system actors, who assume roles through identifiable symbols (role attributes), notably, dress configurations. Mutual identification of alter distributes role privileges in the ensuing interaction and triggers language choice. The enactment of roles defines the social situation. Social situations of central importance to the brotherhood have fixed roles that are assumed and ascribed, with strong sanctions for deviance. Peripheral social situations permit greater role making, where roles are negotiated, ascribed statuses are reduced, and social sanctions are fewer. Peripheral social situations are the primary source for social change. Enninger's work is not for the faint-of-mind or impatient, yet provides a much-needed source of inspiration to strengthen future Amish studies research, theoretically and methodologically.