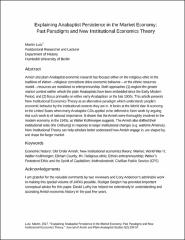 Amish and plain Anabaptist economic research has focused either on the religious ethic in the tradition of Weber—religious convictions drive economic behavior—or the ethnic resources model—resources are mobilized to entrepreneurship. Both approaches (1) neglect the greater market context within which the plain Anabaptists have been embedded since the Early Modern Period, and (2) focus primarily on either early Anabaptism or the late 1900s. This article presents New Institutional Economics Theory as an alternative paradigm which understands people's economic behavior by the institutional contexts they are in. It looks at the World War II economy in the United States when many Anabaptist COs applied to be deferred to farm work by arguing that such work is of national importance. It shows that the Amish were thoroughly involved in the modern economy in the 1940s, as Walter Kollmorgen suggests. The Amish also shifted their institutional rules (the Ordnung) in response to larger institutional changes (e.g. wartime America). New Institutional Theory can help scholars better understand how Amish engage in, are shaped by, and shape the larger market.