Growth and Change: Tracking Ohio's Recovery from the Great Recession 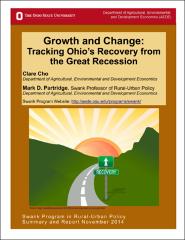 Great Recession that began in December 2007 and ended in June 2009 was the most severe since the Great Depression. In addition to having one of the steepest declines in employment, the recovery has been among the slowest. Yet, we are in our sixth year of economic expansion, which is already the 5th longest since WWII. Although the lengthy expansion has been remarkable given the weak recovery, especially in terms of net job growth, we are getting to the point where another downturn would not be surprising.