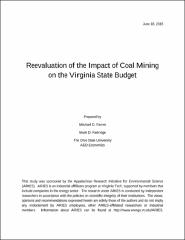 Downstream Strategies, an environmental consulting and policy analysis firm, published The Impact of Coal on the Virginia State Budget in 2012, finding that the coal mining industry was responsible for a net cost of 21.9 million USD to the Commonwealth in 2009 (considering only the Virginia General Assembly's General Fund and Transportation Fund revenues and expenditures). We provide a reanalysis of the same topic, considering the effect the presence of the coal industry has on the entire state budget that is not limited to the General Fund. We estimate that in our study year of 2011, the coal industry contributed 31.95 million USD in taxes and fees to the state while the Commonwealth's expenditures relating to the coal industry totaled 24.4 million USD. However, firms producing coal in Virginia also benefit from two exclusive refundable tax credits which we estimate combine to 49.37 million USD. We find that the coal industry was associated with a net cost of 36.7 million USD to the Virginia state budget in 2011.