The Impact of HIV Test Counselors in Iringa, Tanzania 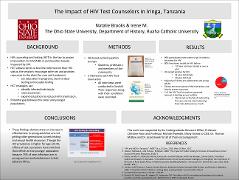 Quality care is necessary for those living with HIV/AIDS and also for people who are at risk for contracting the virus. With improvements of HIV testing techniques and strategies over numerous years, public health initiatives and education has improved the lives of many as well as decrease the risks of contracting HIV. HIV counseling and testing (HCT) is the key to proper intervention for HIV/AIDS in communities heavily impacted by the virus. HCT allows clients to become informed on their HIV status, the sessions encourage safer sex and provides resources to the client for care and treatment. Through counseling and testing offered to the public, HCT strategies can identify infected individuals, raise awareness and expand education to reduce HIV transmission. However, there is a gap between the older and younger population when utilizing resources that allow them to receive HCT resources. Here we show that this leaves the older population more at risk for becoming infected with HIV in Iringa, Tanzania. In the 50 closed-ended question surveys, it reveals 80% of the participants ages 18-30 have been tested for HIV before. HIV Test Counselors and other professionals in the medical field provided information explaining that clients seeking testing and barriers for sexual activities tend to be young adults and adolescence. These results and information provided demonstrates an increase in effectiveness in the younger population but is not getting older generations to seek testing and sexual health resources. Though the HIV prevalence is higher for ages 30-49, efforts have been switched to the younger population because 75% of new infections are in young women and adolescence in Sub-Saharan Africa. HCT techniques changed over time and caused a shift in the target population.