A Possible Evolutionary Channel for the Recently Discovered Class of Millisecond Pulsars in Long, Eccentric Orbits 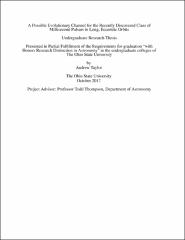 We consider an evolutionary channel for the recently discovered class of millisecond pulsars (MSPs) on relatively long, eccentric binary orbits. If the standard model for formation of MSPs involving a low-mass X-ray binary (LMXB) mass transfer stage is the origin of these systems, the observed companion cannot have been the star involved in the binary interaction with the pulsar. Instead, we consider a tight triple system, where the nearby binary companion is ablated away, as in observed black widow and redback systems. The tertiary induces Kozai-Lidov eccentricity oscillations, enhancing mass loss. We solve the secular equations for triple dynamics including ablative mass loss. We demonstrate that eccentricity-aided ablation reduces the timescale required for the MSP to ablate its companion by a modest factor and increases the parameter space of initial systems that may lead to what we observe today. We find that the approximate dependence of the overall timescale for ablation on eccentricity is $\left(1-e_{1,max}\right)^{1/15}$, assuming low initial eccentricity, where $e_{1,max}$ is the maximum eccentricity of the inner binary driven by Kozai-Lidov oscillations. We survey the parameter space of binaries using a public Binary Stellar Evolution code. Next, we inject tertiaries with randomly chosen orbital parameters to search for systems satisfying the ``outer" semimajor axes we observe today. We find no surviving systems with outer semimajor axis less than 1 AU, in conflict with the observations, and suggesting binary and triple star evolution not captured by the standard theory. We point to triple common envelope evolution as a possible formation method for tight, stable triple systems. We conclude that eccentricity-aided ablation is capable of reducing the ablation timescale of dynamically active triple systems by modest factors, and this works to increase the number of systems that can produce long-orbit, eccentric MSP systems.