The Syntax of the 'Infinitive' in Swahili 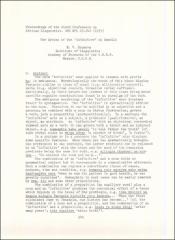 The term 'infinitive' when applied to lexemes with prefix ku- is ambiguous. Morphologically the words of this class display features similar to those of nouns (e.g. alliterative concord), verbs (e.g. objectival concord, formative verbal suffixes). Additionally, by their nature the lexemes of this class bring about specific negative constructions found in no paradigm of the verb. The ambiguous morphology of the 'infinitive' also displays itself in syntagmatics. The 'infinitive' is syntactically similar to the noun. Therefore it can be modified by an adjective and a pronoun; be combined with a noun in Status Constructus; govern a verb; join a preposition (postpositionally). In a sentence the 'infinitive' acts as a subject, a predicate (qualificative), an object, an attribute. An 'infinitive' with an objectival concordial element acts as a verb: it can govern both a direct and an indirect object, e.g. kumwambia baba ukweli 'to tell Father the truth' (cf. such verbal nouns as mtega ndege 'a catcher of birds', 'a fowler'). In a syntagm or in a sentence the 'infinitive' also displays some specific features. When there are two grammatically homogenous predicates in one sentence, the latter predicate can be replaced by an 'infinitive' with the tense and the mood of the remaining predicate being the same for both, e.g. aliingia chumbani na kusema... 'he entered the room and said...'. The combination of an 'infinitive' and a noun holds no grammatical subject but it corresponds to communicative utterance. Such a combination can replace a subordinate clause of cause, purpose, time and condition, e.g. kumwona yule mgonjwa wake mzima akastaajabu sana 'when he saw his patient in good health, he was greatly surprised'. Homonymity in such cases can be easily removed by kwa, ili and some other prepositions. The combination of a preposition (an auxiliary word) plus a noun and an 'infinitive' produces the contextual effect of a tense which depends on the tense of the predicate, e.g. toka mkoloni wa kwanza kuingia Tanzania historia yetu imekuwa... 'When the first colonizers came to Tanzania, our history has become...' (cf. the combination of a noun and a preposition, and the combination of an 'infinitive' and a preposition, e.g. baada ya miaka mingi 'after many years'; toka kuzaliwa 'since birth').