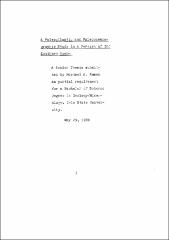 Nine deep-sea piston cores recovered along a north-south track from 58 S to 52 30'S at about 10 E were dated using Weaver's (1976) modification of McCollum's (1975) high latitude diatom zonation and paleomagnetic data. Deduced climatic fluctuations during the past five million years are based on Weaver's (1973) model for climatically related marine sedimentation and on the distribution of sediment types and unconformities in the nine piston cores. Conditions during part of the interval from the Pliocene/ Miocene transition (about 5.0 m.y. B.P.) were cool and are represented by unconformities, which resulted from the increased production of Antarctic Bottom Water. Climates that began warming before the Gilbert "b" event (4.14 m.y. to 3.97 m.y. B.P.) is represented by siliceous sediment, which continued accumulating until late Gilbert. Sometime after the beginning of the Gauss magnetic epoch (3.32 - 2.43m.y. B.P.) climate deteriorated and led to one or more episodes of regional scouring or nondeposition, By the end of the Olduvai magnetic event (1.86 – 1.71 m.y. B.P.) sediment began accumulating again. From the end of the Olduvai until the present, climate and oceanographic conditions fluctuated but not as drastically as earlier and sediment accumulated throughout most of the area, The locus of erosion/nondeposition also shifted geographically to areas in the north and south of the study region in the Holcene and possibly the Pleistocene. The two positions of erosion /nondeposition suggest the action of two bottom water masses, Antarctic Bottom Water and Circumpolar Deep Water.