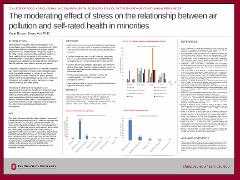 Minorities have long been discriminated against in the United States, and redlining policies pursued in the 1920s-60s prevented African-Americans from moving outside polluted inner city neighborhoods. This policy resulted in the siting of many environmentally hazardous facilities in these neighborhoods, exposing racial minorities to increased levels of air pollution that persist to this day. Exposure to air pollution is associated with low birth weight, asthma, diabetes, heart attacks, strokes, and obesity. In addition to increased exposure to air pollution, minorities also experience higher levels of perceived discrimination, which is a reliable predictor of chronic stress. Chronic stress leads to constant output of the stress hormone cortisol, which increases blood pressure, insulin resistance, cholesterol, and weight, as well as decreases immune function, memory, and sleep quality. The effects of a lifetime of increased stress are hypothesized to compound the effects of disproportionate exposure to air pollution to impact all age groups, from infants to senior citizens, and make African-Americans more susceptible to diabetes, heart disease, stroke, obesity, and asthma than whites. These disparate health outcomes culminate in a 10% decrease in life expectancy for African-Americans compared to their white counterparts. This study aims to explore the effects of stress on the well-established relationship between air pollution exposure and health outcomes by analyzing self-reported health and stress data collected throughout Ohio. It is the researcher’s hope that controlling for stress in data analysis will increase the predictability of health outcomes when looking at populations with various levels of exposure to air pollutants. Establishing the effect of stress on this relationship could help explain variation in health outcomes among Ohioans, especially along racial and geographic lines. The findings could be used to target high risk populations, such as children and pregnant women, for public health interventions geared towards stress management and exposure reduction.

School of the Environment and Natural Resources