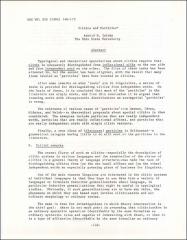 Typological and theoretical speculations about clitics require that clitic be adequately distinguished from inflectional affix on the one side and from independent word on the other. The first of these tasks has been attended to, but the second has been slighted, with the result that many items labeled as 'particles' have been treated as clitics. After some remarks on what 'tests' are in linguistics, a series of tests is provided for distinguishing clitics from independent words. On the basis of these, it is concluded that most of the 'particles' in the literature are simply words, and from this conclusion it is argued that treating words with idiosyncratic distributions as acategorial 'particles' is wrong. The relevance of various cases of 'particles'--in German, Chrau, Hidatsa, and Welsh--to theoretical proposals about special clitics is then considered, The examples include particles that are really independent words, particles that are really inflectional affixes, and particles that are really independent words with simple clitic variants, Finally, a true class of (discourse) particles is delineated--a grammatical category having little to do with most of the particles in the literature.