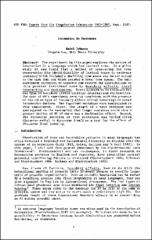 The experiment in this paper explores the nature of intonation in a language which has lexical tone. In a pilot study it was found that a method of accounting for tone preservation (the identifiability of lexical tones in sentence contexts) which included a declining tone space was better suited to the task than one which assumed a level tone space. The main experiment attempted to separate and observe the contributions to this general downtrend made by boundary effects, tonal interaction and declination. There appears to be evidence for one type of boundary effect (initial raising) and declination. The data of this experiment were not consistent with the presence of the other type of boundary effect (final lowering) or tonal interaction factors. Two important variables were manipulated in this experiment. First, the length of a test sentence was manipulated on the assumption that longer sentences would show a greater decline of FO if there was a declination effect. Second, the discourse position of test sentences was varied (from discourse medial to discourse final) as a test for the effect of discourse final lowering.