A Study of Toishan FO 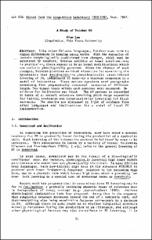 Like other Chinese languages, Toishan uses tone to signal differences in meaning among words. With the exception of certain morphologically conditioned tone changes, which must be memorized by speakers, Toishan exhibits no tonal modifications; in particular, there appear to be no tonal modifications which are strictly phonologically governed. Given the absence of such changes, Toishan provides an ideal situation for examining the hypothesis that declination--a phonologically unmotivated lowering of FO, independent of tone--is a relevant component in a model of intonation. Three native speakers read paragraphs containing five pragmatically connected sentences of different length. Two target tones within each sentence were measured. No evidence for declination was found. The FO pattern is described in terms of an overall structure involving pitch range expansion for initial sentences and compression (or lowering) for final sentences. The results are discussed in light of evidence from other languages and implications for a model of local FO implementation.