The Tonal Behavior of Osaka Japanese: An Interim Report 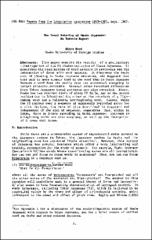 This paper reports the results of a preliminary investigation of the FO characteristics of Osaka Japanese. It describes the realization of word accents in sentences and the interaction of focus with word accents. It discusses the basic unit of phrasing in Osaka Japanese sentences, and suggests that this unit is more closely tied to the word than in Tokyo Japanese because a word does not easily lose its acccentual integrity in larger prosodic contexts. Several other important differences from Tokyo Japanese tonal patterns are also revealed. First, Osaka has two distinct kinds of sharp FO falls, one at the accent nucleus (as in Tokyo) and the other at the boundary of a High-- ending word and a following Low-beginning word. Second, while the FO contour over a sequence of supposedly H-pitched moras has a slow decline, the rate of this downtrend is constant and independent of the size of sequence, suggesting that, unlike in Tokyo, there is H-tone spreading in Osaka Japanese. Uptrends in L-beginning words are also examined, as well as the interaction of L tones with focus.