Perceiving by Syllables or by Segments: Evidence from the Perception of Subcategorical Mismatches 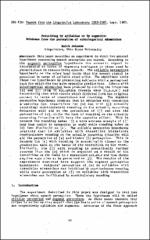